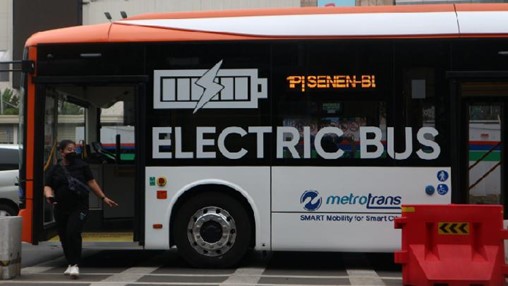 TEMPO.CO, Jakarta - TransJakarta Head of Public Relations and Partnership Iwan Samariansyah, said that the company planning to operate 1,000 electric busses in 2023 to tackle one of the capital city's most crucial issues, pollution. Currently, Transjakarta operates 30 electric busses and hoped to increase the number to 100 by the end of 2022. Most of the electric busses are currently serving the Senen-Blok M route and Blok M-Tanah Abang route. "The goal is to operate 1,000 bus units by next year and in 2025, increase that number to 3,000 electric bus units. That indeed is ambitious but we are optimistic about it," said Iwan at his office in East Jakarta on Tuesday, July 19, 2022. Iwan added that operating electric busses fleets aligns with the Jakarta government's role to support Presidential Regulation No.55/2019 on The Acceleration of Electrically Motorized Battery-Powered Vehicle for Public Transport Program. Major cities such as London, Berlin, Tokyo, and New York, Iwan said, also fall into the category heading in that direction, replacing fossil-based buses with electric fuels. "Public transportation is one of the contributors to emissions," said Iwan. Jakarta Governor Anies Baswedan Targets 100 Electric Buses to Operate by the End of 2022 Jakarta Governor Anies Baswedan had targeted 100 electric buses to operate by the end of 2022. As of today, Governor Anies had inaugurated the operation of 30 Transjakarta electric buses. "By the end of this year, God willing, there will be 100 electric buses operating," Anies said at the National Monument (Monas) area in Central Jakarta back on, March 8, 2022. The Jakarta Governor explained that the operation of electric buses can solve two problems in the capital, namely air pollution, and congestion. The use of electric buses is also in line with the 2022 Intergovernmental Panel on Climate Change (IPCC) report. The IPCC states that cities must accelerate the transition to net zero emissions. The Jakarta provincial government targets to reduce greenhouse gas emissions by up to 50 percent by 2030. In the same year, all buses in the capital are expected to turn into electric vehicles. "This initiative is part of Indonesia's commitment to contribute to humanity's efforts to save the universe and reduce air pollution," Anies said. MOH KHORY ALFARIZI Click here to get the latest news updates from Tempo in Google News The Jakarta administration is considering to conduct a mass COVID-19 swab test due to crowds of teenagers performing the Citayam Fashion Week Jakarta Transportation Department will implement traffic restrictions during the grand launching of Jakarta International Stadium (JIS) on Sunday. Jakarta Government established a task force to oversee the humanitarian organization Aksi Cepat Tanggap or ACT following issue on public funds misuse. Jakarta Police traffic director suggests work hours be regulated in an attempt to reduce traffic jams. The Jakarta government will evaluate the revitalization projects of TransJakarta bus stops located nearby a vital infrastructure. Jakarta Deputy Governor Riza Patria said he had discussed the proposal issued by the police to reduce traffic congestion. Jakarta-owned bus operator Transportation Jakarta or Transjakarta decided to extend the operating hours of its four bus routes starting Thursday. The capital city of Jakarta logged a rising number of Covid-19 cases on Tuesday, July 19. The Deputy governor gives his opinion. The Jakarta Government asked public facilities in the capital to provide COVID-19 booster vaccination services for visitors as an entry requirement. IQ Air ranked the capital city of Jakarta first in the list of cities in Indonesia with the worst air quality earlier this morning.